How is Superhero NFT Wars Merging Gamefi and SocialFi 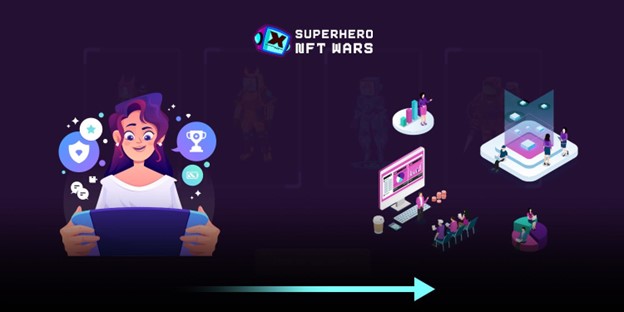 Gaming has been one of the fastest expanding entertainment sectors, surpassing Hollywood. The $200 billion industry has reigned supreme for decades, unifying more than 40% of the world’s population. However, the emerging GameFi sector is bringing a massive transformation to the gaming business.

GameFi leverages blockchain technology and has recently altered the course of gaming’s history. This online gaming paradigm takes on new meaning while also offering gamers an interactive gaming experience. Furthermore, with the emergence of NFTs and the metaverse, it is evolving into something more robust and exciting, namely SocialFi.

From Entertainment to Earning: The Gaming Evolution

Gaming’s original purpose was to bring friends and families together for a good time. However, with the introduction of internet gaming, gamers moved from playing for fun to boosting their competitiveness globally. And this gave birth to some of the earliest eSports leagues.

Then came the smartphones that disrupted the gaming industry. The ease of using a smartphone changed how we do many things, including gaming. The boom was so significant that mobile gaming now accounts for 52% of the global gaming market.

We’ve arrived at the latest gaming iteration. Play-to-Earn games are a hybrid of gaming and blockchain technology. They allow players to earn real-world value through cryptocurrency.  Axie Infinity is a prime example of this. It garnered a $3 billion valuation within a short duration.

SocialFi is the New GameFi

GameFi is evolving rapidly. Its market value has risen to $55.38 billion as of February 2022. It is also anticipated to grow tenfold over traditional gaming by 2025.

However, the trend is gradually shifting from GameFi to a more efficient model—SocialFi. The relevance of social networks in today’s world and the engagement aspects of GameFi form the foundation of this new paradigm.

Emerging decentralized social networks with DeFi functionalities provide users immense flexibility and benefits. With features like robust data privacy, transparency, and fair monetization, SocialFi proves its worth as an efficient model in the blockchain space. Incentivizing users optimally with digital assets like NFTs becomes all the more promising for end-users in the long run.

While numerous projects offer various flavors of SocialFi, only some have successfully  and robustly combined GameFi and SocialFi. Superhero NFT Wars is one among them. It is one of the top three SocialFi projects building a unified infrastructure to connect NFT-oriented communities via platform-level social services. It thus integrates social media, cross-IP engagement, community building, and value creation under one hood.

While the primary focus is on building a SocialFi landscape, the project has other multiple features, including a staking desk, central IDO marketplace, NFT trading front desk, nightclub ballroom, etc. Moreover, SNW will also have a marketplace for users to buy and trade their NFTs. Beyond that, SNW’s social metaspace will host social events to explore the community engagement aspects.

The platform will launch with its NFT collections — SNW-CB and SNW-X. The goal is to create an industry-first, layer-0 social tool in the form of a movable and evolvable membership pass. The NFT utilities include a unique avatar in the metaspace, exclusive Discord access, and $SNW token airdrops. Furthermore, owning these NFTs will enable participation in game development and voting on the game’s DAO governance.

The Future of SocialFi

While SocialFi platforms are still in their early stages, particular efforts have already shown enormous promise. For example, Superhero NFT Wars, as discussed above, is leading some genuine innovation in this space with its metaspace.

We may see SocialFi in 2022 as the DeFi summer of 2020. So it’s only about time when users move in flocks, away from Twitter and Instagram, towards blockchain-powered SocialFi platforms.