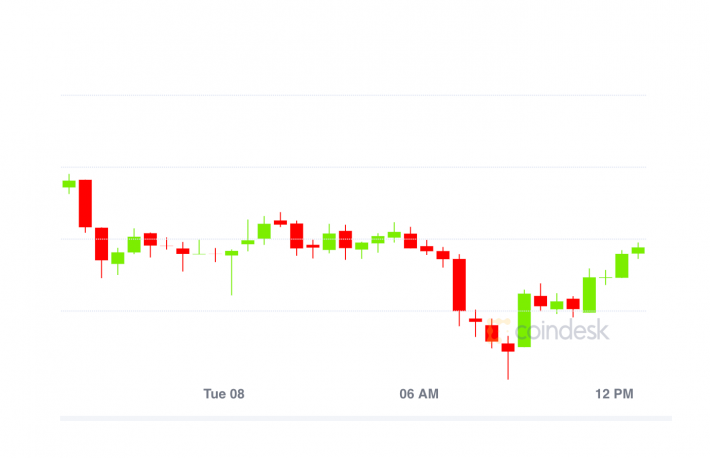 A double-digit cryptocurrency market capitalization drop is being attributed to a major shift to bearish sentiment. Bitcoin volumes and volatility are still lower than ether’s but Ethereum-based opportunities have analysts optimistic for the future.

Bitcoin’s volume the highest in over a week

Bitcoin, the world’s largest cryptocurrency by market capitalization, was down Tuesday by 7.6% as of press time. The price was above the 10-hour moving average and the 50-hour, a sideways signal for market technicians.

Continued concerns about the regulatory regime for crypto in China were among the reasons for many investors to turn bearish on bitcoin. Some traders are also worried about the possibility of tighter monetary policy from the U.S. Federal Reserve, which might put downward pressure on risky assets, including cryptocurrencies.

As the price of BTC fell over the past 24 hours the trading volume rose, reaching $2.9 billion as of press time on Tuesday, the most since May 28. For 2021 so far, daily averages have been at a much loftier level, around $4.9 billion, based on spot markets tracked by the CoinDesk 20.

“Bitcoin has found its footing since becoming oversold from an intermediate-term perspective within its long-term uptrend,” said technical analyst Katie Stockton of Fairlead Strategies. “As it stands, we would look for bitcoin to establish a lower high versus April without damaging the long-term uptrend.”

When will ether volumes drop below bitcoin’s?

The second-largest cryptocurrency by market capitalization, ether, was trading around $2,502 as of 21:00 UTC (4:00 p.m. ET), slipping 8.2% over the prior 24 hours. The asset is above the 10-hour moving average and the 50-hour, a flat signal for market technicians.

Ether’s momentum, in the form of volume, continues to beat bitcoin’s. For 10 straight days , the number of ETH changing hands has exceeded BTC volumes. Analysts are beginning to think this may be a longer-term trend, especially considering how much higher bitcoin volumes had been for most of the year.

Constantine Kogan, a crypto investor and founder of investment community BullPerks, thinks ether’s upstart rise in 2021 as an institutional asset is just beginning.

“Long term, I think Ethereum will grow, as proof-of-stake is proving to be a more scalable consensus mechanism,” Kogan said of the blockchain.

“Price action right now has been stronger for ETH than for BTC, and it’s shown up in the BTC/ETH correlation as well as in the derivative markets,” added Nathan Cox, chief investment officer of crypto fund Two Prime.

In the ether options market, strikes below the $2,560 price level are heavily favoring puts because traders are preparing for any possible scenario, including over 64,000 ETH total open interest at the ludicrously low $400 strike.

“The recent volatility has left traders a little spooked and willing to pay up for downside protection,” said Two Prime’s Cox. “But volatility levels all around have basically collapsed at this point, with BTC [volume] trading back to the low end of the range.”

Indeed, after jumping to over 170% in 30-day annualized volatility in late May, ETH’s price gyrations are declining, to 162% as of Monday, based on the most recent data from CoinDesk Research. Also, bitcoin’s price volatility has flattened as of late, to 89%.

“I expect some rangebound trading from here as new hands are hesitant to commit new capital, and long-term HODLers are deciding if this is the right price to continue accumulating,” said Cox. “Short term, I think you see ETH continue to outperform.”

The total crypto market cap declined on Tuesday by over 7%, according to data aggregator CoinGecko. In the market for alternative cryptocurrencies, or altcoins, Fairlead’s Stockton sees a mostly flat-to-bullish outlook for the week ahead.

“Most cryptocurrencies have crossed bullish thresholds versus bitcoin, excluding stellar and cardano, which have neutral relative strength outlooks, and tether, which should remain out of favor while the oversold bounce persists in the space,” noted Stockton. “The cryptocurrencies pointing up and to the right should outperform, whereas downturns in uniswap and chainlink suggest they may lag.”