KuCoin Exchange Report Shows Growing Crypto Adoption In The US 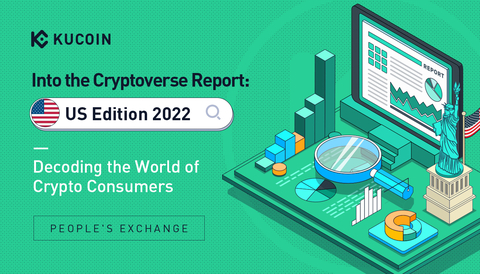 The Into The Cryptoverse US Report by KuCoin — a global cryptocurrency exchange — revealed striking statistics regarding the positive dynamics of blockchain and digital currency adoption in the United States. Findings show that adults and younger generation users are leading the integration of cryptocurrencies into daily financial operations, the report indicates.

The survey provides important data related to US user investment sentiment, which has added up to 5% of new adults to the industry compared to the fourth quarter of 2021. Over 8 million new users have entered decentralized space, constituting a total of 50 million users across the US, or as much as 27% of adults aged 18-60. The figures indicate that such a number of users have traded cryptocurrencies in the past six months or are intending to do so.

Demographic shifts have also been identified, as up to 35% of investors are women as of the first quarter of 2022, a 5% increase over a quarter. During the same period, as much as 47% of female investors were surveyed, which is still 17% lower than male users.

Overall interest in cryptocurrencies is also on the rise in the United States. A total of 59% of those surveyed stated that they are willing to increase their investments, largely due to the narrowing generation gap, which has seen a 7% increase in 42–50-year-old users.

The growing yields of digital currencies are largely at play in such increases, as the share of users earning in excess of $100,000 a year has grown by as much as 7%. The growing degree of crypto education is a contributing factor, as evidenced by the survey, which revealed that up to 58% of crypto investors were familiar with digital assets by the first quarter of 2021, with up to 71% of young users claiming to receive information from social media.

Investors in the United States are turning to digital currencies as a means of improving their quality of life and earning potential, as evidenced by 37% of respondents. Millennials, Generations Z and X are among the leaders of such opinions. As many as 48% of US crypto investors consider cryptocurrencies to be “the future of finance,” which is the top reason to invest across all age groups.

The growing number of users entering decentralized space is being determined by diminishing incomes and increased popularization of digital currencies through social media and online educational efforts. The KuCoin Into The Cryptoverse US Report is an important source of statistical data on blockchain penetration, which is in line with earlier releases related to Germany, Africa and Brazil.