Jul 2, 2021 africa, bitcoin, community, could, crypto, does, exchange, market, markets, more, new, off, says, securities, use, when, will 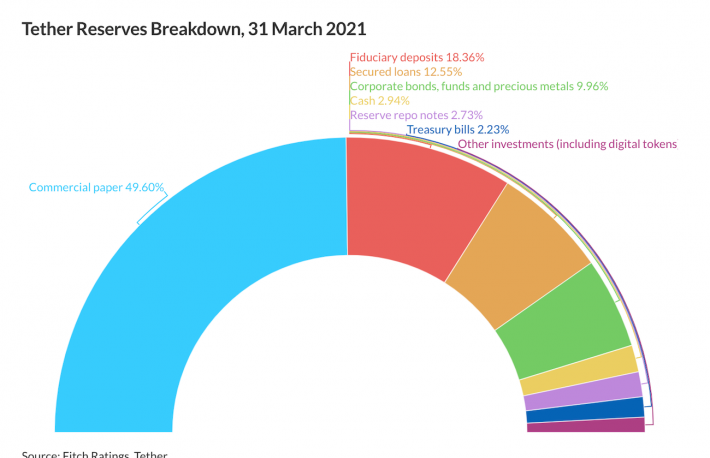 The rapid growth of stablecoin issuance could have implications for the functioning of short-term credit markets, the bond-rating service Fitch said Thursday.

Stablecoins, typically digital tokens linked to government-issued currencies such as the U.S. dollar, could pose “contagion risks” over time, the ratings service said in a press release.

Fitch noted that Tether, the largest stablecoin issuer, had increased total assets of the dollar-linked stablecoin USDT to $62.8 billion on June 28. According to the release, Tether had announced it held only 26.2% of its reserves in cash, fiduciary deposits, reverse repo notes and government securities, with a 49.6% in commercial paper (CP), a type of short-term corporate debt.

Tether’s CP holdings amounted to $20.3 billion on March 31, according to Fitch.

Some traders, analysts and economists have speculated that financial losses at Tether or even a crisis of confidence might trigger a sell-off that could put downward pressure on prices for other cryptocurrencies, including bitcoin.

The Fitch report suggests the turmoil also could also have implications for traditional markets.

“A sudden mass redemption of USDT could affect the stability of short-term credit markets if it occurred during a period of wider selling pressure in the CP market,” said the report. “These figures suggest its CP holdings may be larger than those of most prime money market funds in the U.S.,” as well as in Europe, Middle East and Africa.

Potential asset contagion risks linked to the liquidation of stablecoin reserve holdings “could increase pressure for tighter regulation of the nascent sector,” according to Fitch.

The report defines contagion risks to be primarily associated with “collateralized stablecoins, varying based on the size, liquidity and riskiness of their asset holdings,” among other things.

There’s less risk associated with coins that are fully backed by “safe, highly liquid assets,” according to the rating service. Stablecoins that use fractional reserves may run a greater risk.

David Grider, lead digital asset strategist at the independent research firm Fundstrat, wrote separately in a report Thursday that stablecoins are “becoming a big part of the crypto economy with the total value of stablecoins outstanding now at ~$108 billion.”

He said it’s important to note that “these assets look a lot more like digital debt than digital dollars,” since they’re really just a promise that the money will be paid back the money when the instruments are redeemed.

“The main risk to users is that the issuer does not have the collateral to meet redemptions when requested by the stablecoin holder,” Grider wrote.

He gets frequent questions about Tether, he wrote, since “many in the crypto community have been concerned for years that the value of Tether is not backed by sufficient dollars to cover the outstanding USDT tokens.”

“Tether is essentially a big credit fund with a pool of debt assets of their own that they say cover the value,” Grider wrote. “They say most of their assets are in money market commercial paper, which if true would be relatively low-risk assets.”

He conjectured that his “gut” is that New York State investigators would have discovered if Tether was “lying” about its assets during a recent probe.

“While we don’t know for certain the details about Tether’s reserves, we’re not as concerned about the stablecoin as many others are,” according to the analyst.

“One thing is certain, crypto lenders have been willing to give Tether $60 billion of the best type of financing, with the lowest cost of capital and most unrestrictive covenant-lite borrowing terms, anyone could ever ask for,” Grider wrote.