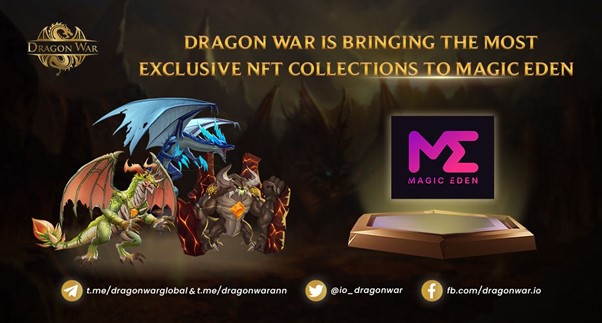 NFT strategy game Dragon War has confirmed a partnership with Magic Eden, Solana’s fast-growing NFT marketplace. As part of the deal, the play-to-earn project will make Magic Eden its preferred INO launchpad, with 5,000 non-fungible tokens (NFTs) set to go live on the site on May 16, 2022.

For the past several weeks Dragon War has been in test mode, and a number of high-profile guilds, VC partners, and KOLs have been busy exploring what the game has to offer and reporting bugs. With the full mainnet launch slated for this quarter, the upcoming NFT sale is a golden opportunity for players to acquire the tokens necessary to win battles, complete quests, climb the leaderboard and trade successfully.

Launched last September, Magic Eden has quickly grown to become the largest marketplace for Solana NFTs, with over three times the volume of second-placed Solanart. According to DappRadar, the venue supports a thriving community of traders and NFT collectors, who collectively power weekly trade volume exceeding $5 million.

Which makes Magic Eden the perfect venue for Dragon War’s vast collection of NFTs. The 5,000 tokens that will be made available on May 16 as part of the Exclusive Epic Dragon collection marks the first time Epic Dragons and Body Parts will be introduced to the community (within the game, each dragon has a unique form based on its elements identified by body parts and fusion). So far, all Dragons and Body Parts introduced from the Game and its Marketplace have been part of the ‘Rare’ level.

In the Dragon War game, players are tasked with assembling the most formidable Heroes and Dragons, the better to win PvE/PvP battles and complete missions. The project has tens of thousands of unique NFTs including Dragons which are rarified through a mix-matching mechanism of 5 Dragon Classes, 5 Elements, and 6 Body Parts with 6 different Rarity Levels for each.

While the original price for the 5,000 Dragon NFTs was fixed at 0.75 SOL, the exclusive price for the public round on Magic Eden will be 0.5 SOL. The top 100 participants in the ongoing Open Test will be whitelisted for the INO (Initial NFT Offering), while the top 10 bug hunters become eligible for an additional Mystery Box.

Ahead of the public launch, interested parties can familiarise themselves with instructions for participating in the test phase, which offers players the first chance to evaluate the release and the opportunity to snare the most exclusive NFTs from the highly anticipated Epic Dragon collection. There is no limit to the number of participants in the Open Test and each test account can be played only in a 7-day stretch, beginning at the first day of account creation. The main purpose is to make sure the in-game economics are sustainable and mutually beneficial for everyone. Additional details to join the Bug Hunter campaign can be found here.

Conceived as a turn-based strategy game that blends elements of Axie Infinity and Heroes of Might and Magic, Dragon War will offer appealing features such as boss raids, a Massive Online Battlefield and guild wars, with familiar earning integrations like staking and farming also in the pipeline. There’s even talk of a fully-fledged metaverse, complete with digital land sales.

Dragon War’s developer team chose the Solana blockchain over Ethereum or BSC due to its near-zero gas fees and lightning-fast confirmations. The game’s native asset, $DRAW, is used for utility, governance and staking purposes, while a second token, $ERA, is predominantly used for purchasing NFTs, upgrading items and covering event fees.

Given the fiercely competitive nature of the blockchain gaming sector, Dragon War has its work cut out to fulfil its lofty ambitions. However, early signs are that it’s well-equipped for the battle ahead. With a name like Dragon War, we really shouldn’t be surprised.